Climate Change in the Baltic

Adaptation to climate change in the Baltic Sea was the topic of a summer course in Rostock. The 19 participants were young, international scientists and students from 13 countries with diverse backgrounds from engineering, economics and tourism, and natural sciences. Working with The Coastal Union Germany, they created a 26-minute-film called „Climate Change in the Baltic - From global problems to local adaptation“. The film is divided into three short films focusing coastal protection, coastal tourism, and nature conservation & fisheries.

The Summer School was held from 6.-17. September 2010 at the Leibniz-Institute for Baltic Sea Research Warnemünde. The focus of the event was on the environmental and economic impacts of climate change. In addition to learning about techniques of physical and ecosystem models, the participants accomplished role-plays and discussed regional differences in concern and how to deal climate change on a global scale.

Students build a model for cliff erosion at the beach and interview dune expert Joachim Schmidt (University Rostock) and residents about the value of dunes and cliffs. They interview three Warnemünde fishermen about the future of fisheries and ask fisheries science expert Cornelius Hammer (VTI Rostock) about the effects of climate change on fisheries. 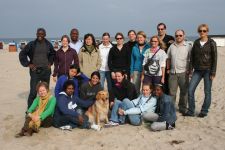